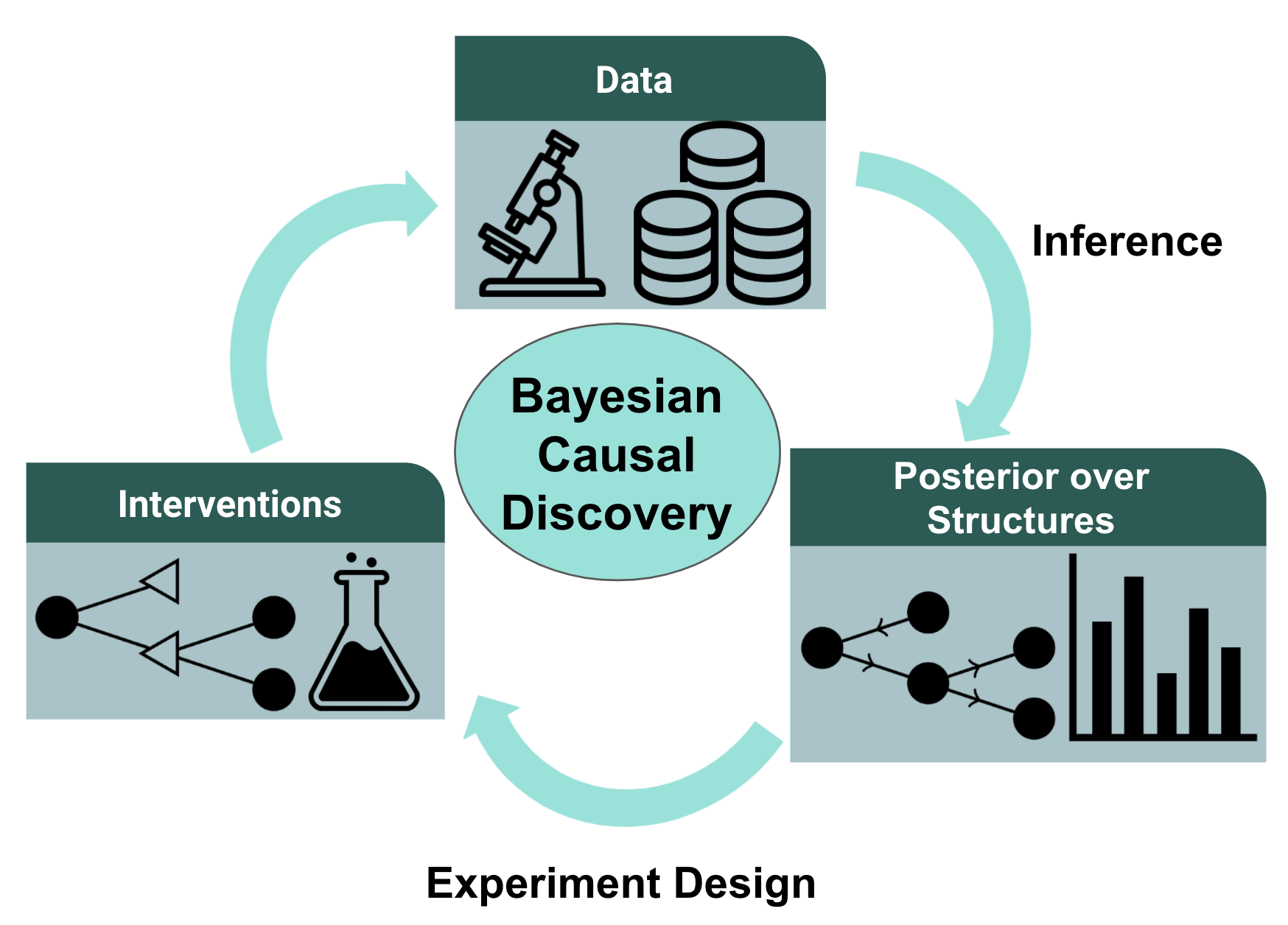 Figure 1: A workflow for a Bayesian approach to causal structure discovery. In two recent works from our lab, we study the inference and experiment design components of the pipeline.

Causality and machine learning have been studied largely independently, but recently there has been significant excitement in the intersection of both fields. One hope is that by inferring causal rather than statistical dependencies, we might be able to design systems that can perform robustly outside of the training environment.

Let’s look at the task of causal discovery by way of the following example: gene regulatory networks (GRNs). Inferring GRNs from gene expression data is a common use case for causal discovery in practice. A GRN may look like the network shown below. 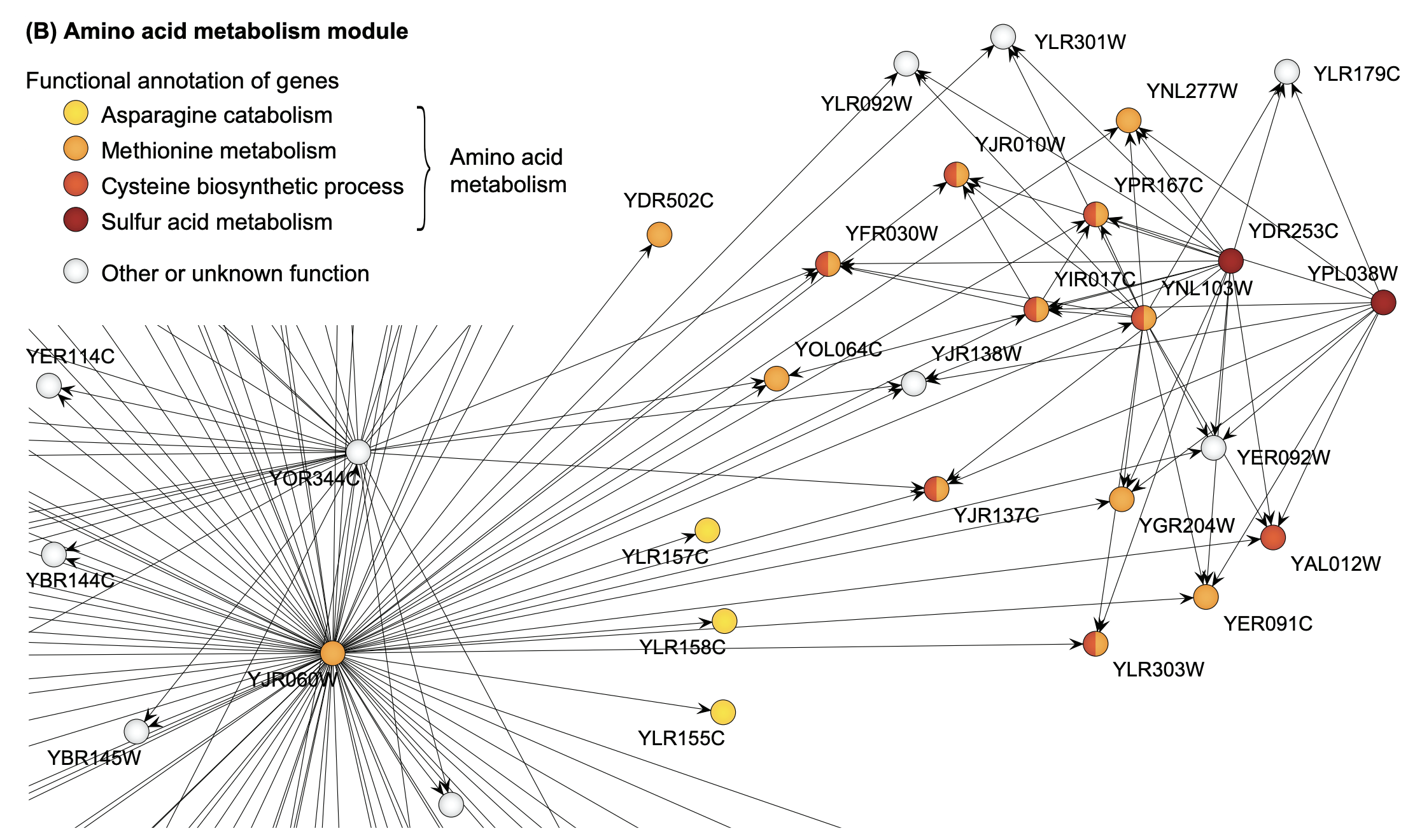 Unfortunately, many existing causal inference algorithms are disconnected from the requirements to successfully apply them in this case.

In two recent NeurIPS 2021 papers that both resulted from master’s theses of our group, we study two aspects of the above causal inference pipeline, to move towards causal discovery with less restrictive and simplistic assumptions in real applications such as GRN inference. First, we will look at how we can infer more complex and realistic structural models given a data set of observations. After, we consider the experiment design pipeline and how we can select batches of interventions to maximize knowledge of the causal structure given a fixed experimental budget.

Let us formalize the ideas from the introduction. Given a data set of observations D = \{x^{(1)}, \dots, x^{(N)}\}, our goal is to discover the causal directed acyclic graph (DAG) G and parameters \Theta that model the causal generative process of the data. In general, G cannot be completely identified using only observations D . The graph can only be identified up to its so-called Markov equivalence class (MEC), where certain edges in the DAG skeleton are not directed. Figure 5d gives an example of all members of a MEC for a specific 5 variable tree graph. Figure 5a shows the compact representation of this MEC using undirected edges. In both works presented here, we assume causal sufficiency: that no two variables share an unobserved common cause.

A (hard) intervention do(x_i := c) sets the value of x_i to c in the generative process, effectively disconnecting variable i from all its natural causes when sampling a joint observation. If c is random, this is akin to a randomized control study. To fully identify G , we require interventional data when intervening upon specific target nodes. The book by Judea Pearl and the book by Jonas Peters et al. give a more formal introduction to causal inference.

As discussed above, in practical applications such as GRN inference, we usually do not have sufficient data \lvert D \rvert to be certain about G or even its MEC. Thus, we may be interested in inferring a Bayesian posterior

In a recent NeurIPS 2021 paper of our group, we propose an efficient, fully differentiable inference framework for inferring Bayesian posteriors over structures (“DiBS”) of the above form. Specifically, by being able to infer p(G, \Theta | D) , i.e. G and \Theta jointly, we are no longer limited to inference of models where the marginal likelihood

\begin{align} p(D | G) = \int p(\Theta | G) p(D | G, \Theta) d\Theta \end{align}
is tractable, which is only the case for linear Gaussian (continuous) or categorical (discrete) local node distributions p(x_j | x_{pa(j)}, \theta_j) and corresponding conjugate priors p(\Theta | G) . The generality of DiBS hence allows us to infer the posterior over the structure and parameters of highly complex and nonlinear models, e.g., with means modeled by neural networks as considered in our experiments. This was previously infeasible and may enable the inference of significantly more realistic models in the presence of nonlinear dynamics underlying real-world systems such as GRNs. 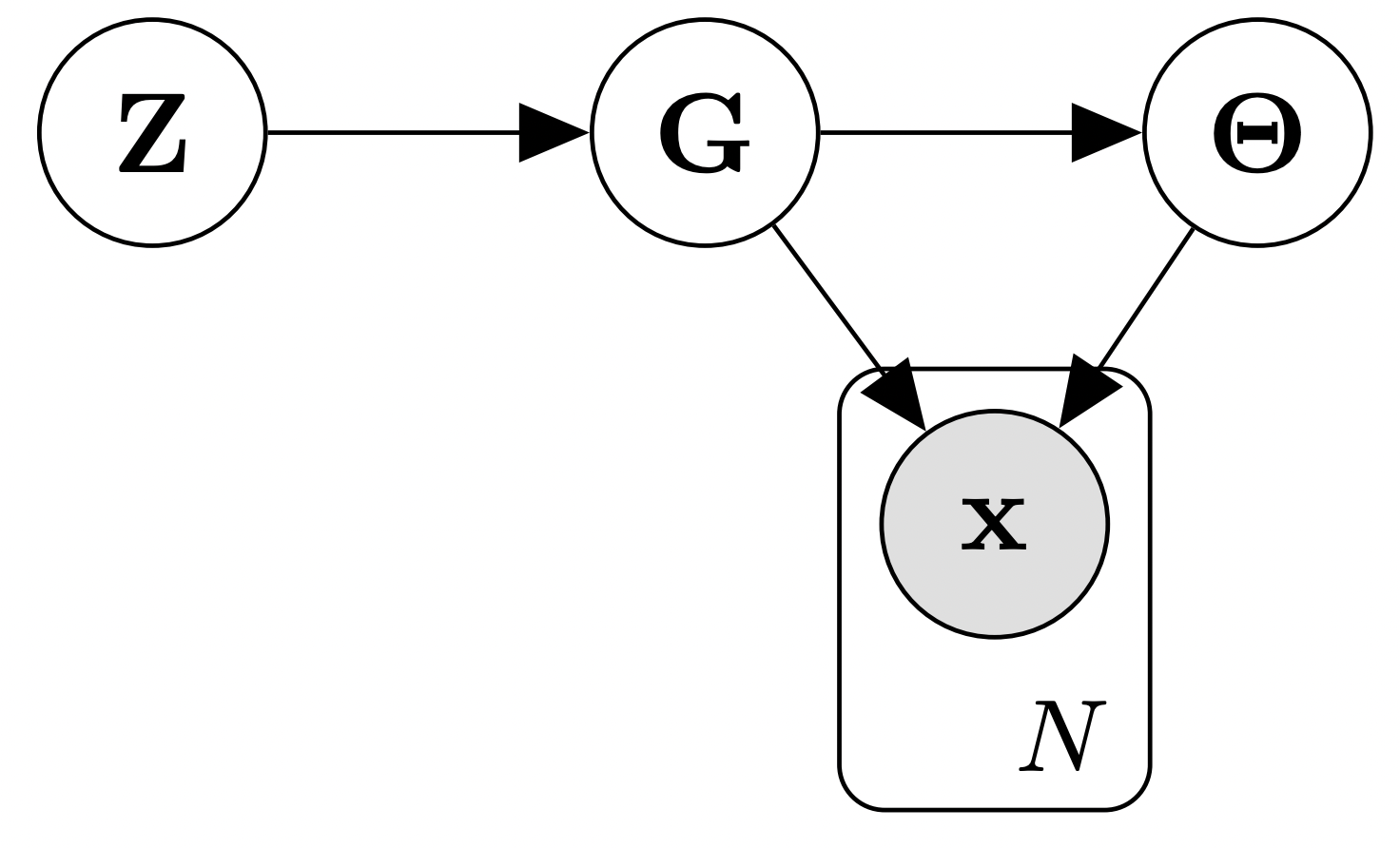 Our key insight is the following: By assuming, without loss of generality, that a latent variable Z governs the generative process of the DAG G , we can translate the inference task over the discrete posterior p(G | D) into an inference problem over the continuous latent variable Z :

We can thus solve our original problem by inferring the continuous posterior p(Z | D) instead. In our paper, we show how to define p(Z) and p(G | Z) to ensure that we only model valid directed and acyclic graphs G . We furthermore provide expressions for REINFORCE and Gumbel-softmax-based estimators for the scores \nabla_Z \log p(Z | D) .[2]Whether or not we are able to apply the lower-variance Gumbel-softmax reparameterization estimator depends on whether or not the (marginal) likelihood p(D | G) or p(D | G, \Theta) have a … Continue reading This allows us to use any general-purpose and gradient-based inference method to ultimately infer p(Z | D) . In our work, we use Stein variational gradient descent (SVGD) to do the job, but in principle, one could also consider methods like, e.g., Hamiltonian Monte Carlo (HMC) or Stochastic Gradient Langevin Dynamics (SGLD).

Figure 4 below visualizes an example of what inference with DiBS looks like when using SVGD as the black-box inference method. For further details on DiBS, check out our paper and the corresponding GitHub repository with code and an example notebook used to generate Figure 4.

Figure 4: DiBS with SVGD for inference of p(G, \Theta | D) for synthetic data from a linear Gaussian model. The top shows the true adjacency matrix G . Below are the matrices of edge probabilities modeled by the particles Z (here 20) that are transported by SVGD to approximate the posterior.

Having considered the graph and parameter inference part of the causal discovery pipeline, we will now look at the optimal experiment design process, and specifically how we can select near-optimal batches of interventions to maximize knowledge of the causal structure given a fixed experimental budget.

For learning gene regulatory networks, it is possible to perform large batches of experiments concurrently. This setting motivates a second paper of our lab presented at NeurIPS 2021. Much prior work in this domain designs batches where each experiment intervenes on a single variable. However, it is possible in single-cell biology experiments to intervene on multiple variables for a single cell. Motivated by this technology, we tackle the problem of how to select batches of multi-perturbation interventions. We use the term perturbation to describe the change to a single variable in an intervention on multiple variables.

Concretely, we consider designing a batch of multi-perturbation interventions \xi = \{I_1, I_2,\ldots\} . We constrain both the batch size \lvert \xi \rvert \leq m and number of perturbations per intervention \lvert I\rvert \leq q . To motivate our algorithm, we consider a simplified setting with arbitrarily large amounts of observational data, and arbitrarily large amounts of data for each unique intervention (noiseless interventions). We will see that even with these simplifications, the task of experiment design in this setting is still very challenging. We will also see in experiments that our algorithm, developed under these assumptions, performs well in settings with finite samples. We aim to select \xi to maximize

\begin{align} F_{\text{EO}}(\xi)= \frac{1}{\lvert \mathcal{G} \rvert } \sum_{G\in\mathcal{G}}\lvert R(\xi, G) \rvert \end{align}
where R(\xi, G) is the set of edges identified by \xi if the true DAG is G , and \mathcal{G} is the Markov equivalence class (MEC) of DAGs given our observational data. In the paper we also propose algorithms for different objectives.

Since we maintain a probability distribution over possible graphs, we can simulate the expected objective value for a given batch before actually performing the experiment. Designing an efficient algorithm boils down to two problems.

Our main result is an efficient algorithm that selects a batch of interventions achieving objective value within a constant factor of the optimal batch. Concretely:

Our algorithm selects a batch by starting with an empty batch and then using a stochastic continuous subroutine to near-greedily select multi-perturbation interventions until the batch size limit is reached. It tackles the two problems listed above by

In experiments, our algorithm performs favorably compared to two baselines: a strong single-perturbation baseline and randomly selected multi-perturbation experiments. Two key settings we explore in our experiments are:

Please check out our paper for further details on the algorithm design and experiments.

The intersection of causality and machine learning is an exciting research area that we think could have a great impact on science and engineering. There are many discoveries to still be made in this direction. In our two works outlined above, we only consider systems no with unobserved confounding, i.e., where all variables that affect more than one variable are observed. Moreover, to fully harness its application in practice, we need to improve the scalability of causal discovery and experiment design methods to more than hundreds or even thousands of variables, e.g. in modern GRN inference tasks.

This post is based on the following two papers: